When I look out at the lake this time of year, I can't help but see memories of our kids playing hockey on the ice...the first winter they used brooms and a tennis ball.  Steve went to town and bought 4 hockey sticks and a puck...they were so excited!  No one had skates...they ran all over the ice with their boots, chasing that puck with their fancy hockey sticks and didn't even feel the cold air on their faces.

They'd come in after a game or two and we'd make hot chocolate.  As the years went on, some of them graduated to ice skates...John was only 4 that first winter....he probably could have been a famous hockey player if we had pursued that sport.  We didn't...instead, they all played basketball and some of them aspired to be "famous" basketball players like their Uncle Doug!

I imagine that one of these winters, I will look out the kitchen window and see little ones playing hockey again...these 6 little grandsons and 2 granddaughters will surely try out their parents' hockey sticks some day...the sticks are waiting in the garage for them!
Posted by Jen at 7:11 PM 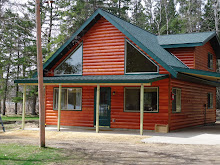